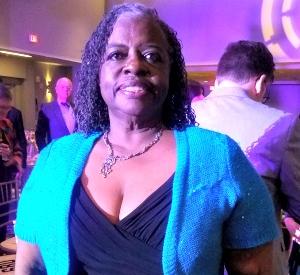 Barbara Robinson-Carey is alive today thanks to the love and support of her husband and two daughters, and through the generosity of her donor.

The busy mother of two grown daughters, Barbara worked for the gas company for 23 years. In her spare time, she traveled, took workout classes, and participated in the Portland to Coast relay, as well as two half marathons. She seemed healthy. In fact, it wasn’t physical symptoms that made her realize something was wrong. She had simple bloodwork done at a health fair sponsored by her employer, but the results of that test weren’t so simple. Instead, she was referred to a nephrologist who told her that her kidney function was declining and she would eventually need dialysis.

For a while, Barbara returned to her busy life, ignoring the lingering tiredness, even through demanding bootcamp workouts. Finally, Barbara’s kidney function decreased to the point that it was difficult to get up and go to work. Then, six years of dialysis began. One of the things that sustained Barbara most was the support she got from her husband, Jade. Having him in her corner was a great help.

On a Saturday afternoon in September 2017, Barbara and her husband received a phone call from Legacy Transplant Services that alerted them that a kidney might be available and to be ready just in case. At 10 that night, Legacy called back. Barbara describes that night, “We waited for the call and it came. He said to be at the hospital at 5 AM. Of course we couldn’t sleep!”

Barbara’s transplanted kidney began working as soon as the doctors put it in, and today, she's back to her full, active life. She says, “I feel totally blessed and thankful to my donor and their family for this beautiful kidney. I could be dead now, but I feel darn good!”

For those considering registering as a donor, Barbara has one simple message: “Love comes in all forms. Being a donor is love.”