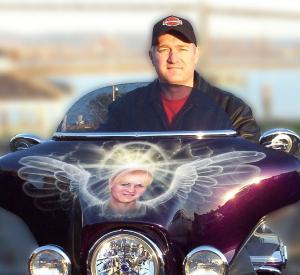 After the tragic loss of his daughter, Carrie, Scott Nance finds strength in sharing their story while spreading awareness for organ, eye, and tissue donation.

Scott ‘Tex’ Nance has an air about him that’s infectious. Whether it's due to his years of experience in public speaking or his subtle southern drawl, when Scott talks, people listen.

When he's not traveling around the world as a software engineer for IBM, Scott is a sought after speaker for Donate Life Northwest. In front of complete strangers, he finds the strength to open up and share his personal and heartbreaking story. He bravely relives his pain in hopes of spreading awareness for organ, eye, and tissue donation.

Tragically, Scott's daughter Carrie passed away on August 3, 2004 in a car accident only a week shy of her seventeenth birthday. Although her death could never have been predicted, Carrie had already helped her family prepare.

Intrigued by the topic, Carrie had chosen to do a research project on organ donation for her health class. Soon after completing her project, Carrie registered as a donor herself, and more importantly, she shared her decision with her family. So when her life ended so suddenly, Scott felt that a traumatic piece was taken out of the puzzle.

Scott continues to share his and Carrie's story. Ultimately, the most important message he hopes to spread is communication among families. "Nobody wakes up thinking, 'I'm going to die today'," he explains. "So it's important to communicate your desires with your family, in case something does happen. That way, they can be prepared."

In the end, Carrie's decision to register as an organ donor saved the lives of four individuals. Had it not been for her choice, a man named Henry who received her liver would not have lived through the week. As painful as her loss remains, "Her death gave life," Scott said. "I lean on those things."

Donate Life Northwest urges people to designate themselves as a donor. Code your driver's license as donor, sign up on line at donatelifenw.org, or call 503.494.7888 or 1.800.452.1369 for a paper registry form. Please... share your decision with your family!