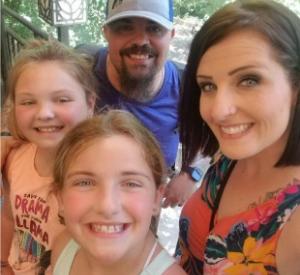 Chad's heart problems took him by surprise, but they didn't stop him. Thanks to a generous heart donor, he is on the road to recovery.

Chad Sharp has always been a busy guy – a husband and father who has spent most of his adult life driving trucks, sometimes for the long haul. He loves the outdoors – fishing, hunting, camping and spending time with his family and friends. He was never a smoker or drug user, and his family didn’t have any history of heart problems, and so when Chad experienced congestive heart failure in 2009, at the age of 30, it was especially surprising.

In March of 2018, after several years of cardiac care, Chad was having a routine heart catheterization at OHSU when doctors found previously undetected atrial fibrillation (AFib). The AFib destroyed Chad’s heart, and doctors determined Chad would need a transplant. In May, Chad was implanted with a left ventricular assist device or LVAD that would sustain him and keep his heart pumping until transplant.

With his LVAD, Chad was able to return to his family and return to an office position at work. He learned to cope with his physical limitations, even doing many of the household chores while his wife, Megan, worked full time. In 2018, he was put on the transplant waiting list at University of Washington and began the wait for a heart.

Chad received the call from University of Washington on the morning of August 28, 2019. In a fog of emotions – scared, happy, worried, relieved – Chad and Megan drove to Seattle for his heart transplant.

Just a few months since his transplant, Chad is still navigating the slow road to recovery. But he says that he’s feeling better every day. “I’ve hiked more in the last three months than I have in the last five years. I take long, hot showers, and enjoy every moment.”

Chad is overwhelmed with gratitude for his donor – a man he never met and doesn’t know. This stranger has given him a future that will allow him to watch his daughters grow up, graduate, and start families of their own.

“I can’t describe in words the gratitude I have for the donor and their family for making the decision to donate. It is the most selfless gesture a person or family can make.”

Chad has become an advocate, telling people his story and urging them to register as donors: “Donation is the kindest final thing you can do for another human being. It not only gives the recipient life but gives the donor’s family a feeling that their loved one’s final act was meaningful and selfless.”

Finally, Chad reminds us, “People deal with adversity every day – continue to fight with a smile.”