David’s lung donor gave him back life and health – and he’s shouting his thanks literally from the mountaintops.

David Terry has always lived a busy life as a happy family man, an active athlete, and a successful professional at Wieden+Kennedy global creative agency. But for years, he also struggled with severe, progressive lung inflammation, which eventually became Idiopathic Pulmonary Fibrosis. David’s lungs became riddled with scar tissue, and he began to need supplemental oxygen just to walk – forget doing any of his favorite physical activities.

For about 9 months, David was on the national lung transplant waiting list. “I knew I was dying,” he shares. “My family was stoic on the surface, but underneath they were dealing with anticipated grief and anxiety.”

On February 13, 2020, a phone call came from the University of Washington in Seattle. The next day, Valentine’s Day, David received a bilateral lung transplant.

The strong emotions David and his family had faced didn’t end with the call from UW. In fact, they amplified. “Ninety-five percent of me was ready for transplant. But 5 percent was freaking out.” And there was also the knowledge that his life wasn’t the only one going through drastic change. He explains,” While my family was full of hope, another family, at that same time, was having the worst time of their lives.” 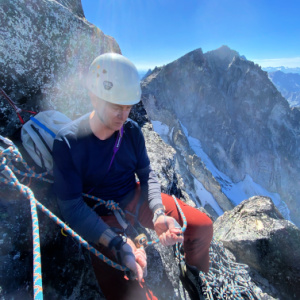 These days, David takes deep, grateful breaths. With a smile, he exclaims, “I’m just so damn happy to be alive and breathing!” But every moment, as he lives his gifted life to the fullest, he remembers his donor and their family. He explains, “I can do things that I never thought that I would ever be able to do. But I can only do that because some person died. And so however many days I have of joy and happiness, there’s that many days that another family is dealing with an immeasurable loss. And that will always be a part of how I feel about this. I carry both of those sides.”

David is making the most of his donor’s lungs. Just six months after transplant, David climbed the Dragontail Peak in the Stuart Range in Washington State – 2,000 feet of roped climbing at a difficulty level of 5.8. He describes, “We hiked and climbed over 23 miles with 10,000 feet of elevation gain in 21 hours!” And in 2022, he cycled the most iconic and difficult mountain passes of the Alps that have been made famous by the Tour de France and the Giro di Italia.

For those who hear or read his story, David has a clear, strong message: “Be a donor. I am a living, breathing, walking, running, cycling example of what that does, and the happiness and joy and gratitude that it puts back into the world.”