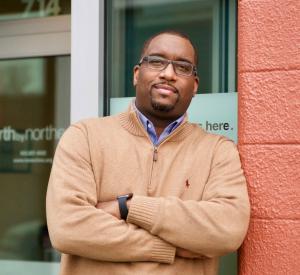 Thanks to a generous kidney donor, Hasan Artharee is able to devote his time and energy to what he loves most – his wife and four children.

He was only 22 years old when Hasan learned he had Polycystic Kidney Disease (PKD). His mother, grandmother, and uncle had battled this disease before him, and so he was familiar with the hereditary disease. Doctors told him that he probably wouldn’t experience symptoms right away and might not need to begin dialysis until he was in his 40s or later, but after just 10 years, Hasan’s 32-year-old kidneys began to decline. Finally in 2013, at the age of 35, Hasan began dialysis and started the process to join the kidney transplant waiting list.

In some ways, Hasan was a very fortunate patient. Because of his family’s medical history, he had worked hard to follow the doctors’ instructions and had his kidney function monitored closely. This monitoring allowed him to begin dialysis before his health reached a crisis, and so he didn’t experience the severe symptoms he might have otherwise. And because he had watched his mother and grandmother go through dialysis, he knew what to expect when he faced it himself.

Dialysis changed Hasan’s life drastically. Though he was able to continue working for the City of Portland, his schedule and workload had to be adjusted to accommodate his dialysis schedule and his energy level. Over time, that meant stepping down from his management position and eventually going on disability. At home, his family made every effort to support him as his energy level decreased and his health declined. Dialysis enabled him to live, but he often felt “extremely exhausted,” and just wasn’t able to have the quality of life he and his family had enjoyed before.

During his five years on the transplant waiting list, Hasan’s transplant coordinator recommended that he seek support from Donate Life Northwest’s Erase the Wait living kidney donation mentorship program. He and his family were well aware that seeking a living donor might help him get a donation faster. Together, he and his wife joined, and while his transplant ultimately came from a deceased donor, the program still gave them great information and tools. He enjoyed meeting others who could relate to and understand the challenges he was facing. And his mentor, Jen, herself a kidney recipient, was a great encouragement to Hasan.

After being on the transplant waiting list for over five years, Hasan did some research, talked with his transplant team, and decided he would be willing to accept an increased risk donor kidney. This meant that his doctors would consider transplanting an "increased risk" organ that has a higher risk (less than 1%) of infectious disease, but is still a good organ that is worth accepting rather than continuing to wait. These organs are tested extensively prior to transplantation, and so Hasan felt comfortable making this decision.

In September 2018, Hasan walked out of a friend’s funeral to hear his phone ringing. His wife told him that Oregon Health & Science University (OHSU) had called – they had a kidney for him. It was an increased risk kidney.

Since his transplant, Hasan is experiencing something for the first time in years – he doesn’t have to go to the dialysis clinic anymore. Not for himself, his mother, or anyone else. He says, “I am fortunate to be relieved of something that has been a large part of my life for so long and now have the time and energy to pursue things I enjoy.”

Hasan is enjoying activities with his family again. Since he was a college athlete, he’s always loved to move around and be active. Without dialysis holding him back, he can be physically active and enjoy bike rides and playing basketball with his kids again.  He has also been able to resume his passion of coaching youth basketball.

As an African American man, Hasan knows that there can be tasks that will be challenging to navigate as a person of color on dialysis trying to get a transplant.  Since his transplant, he seeks to be a resource for others in similar situations. He can talk about his experiences and share the knowledge he gained along the way. He explains, “As an African American, I feel my experiences and the information I’ve received during my journey can be of assistance to others in the same position.  I believe hearing from someone who is familiar with the matters around minorities with kidney disease will help others feel comfortable knowing they can relate with someone who shares the same cultural background.”

For those who are considering becoming a living kidney donor, Hasan has this advice: “Get as much information as you can. Talk to someone who has donated an organ and someone who has received a transplant. Lastly, know that your organ donation would be giving someone a profound gift—a second chance at life.”

For those who are awaiting a transplant, Hasan says, “Focus on your overall health.  Be proactive in understanding your options, ask questions and do your research.  There’s a light at the end of the tunnel and you will get through this.”