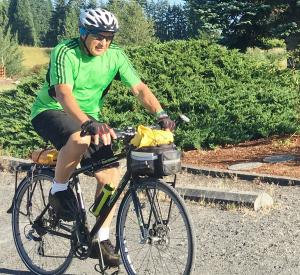 J. Grant is full of surprises. He donated a kidney at age 69, and was soon racking up 1,995 miles on a bicycle tour through every county in Oregon.

Now a mentor in the Erase the Wait program, J. began his journey with living donation when his wife Nancy began to experience kidney failure.

“At first, it did not register with me how serious it could be,” J. says. The couple thought that if Nancy did all the right things to combat the impact of polycystic Kidney Disease and Chronic Kidney Disease, they could hold off kidney failure. But, after six years, Nancy’s kidney function was so low, she was referred to the waiting list for a deceased donor.

The Grants began searching for living donors within their circle of family and friends, but nobody was a match. In 2014 they learned about the paired donation program at Legacy Transplant Services and J. began the process of qualifying as a donor in the program so Nancy would have a better chance at a living donor match.

J. learned that staying healthy enough to donate would be a critical part of the process, so he started riding his bicycle again. In the past, he had taken seven bike tours through the Pacific Northwest, often as part of fundraising efforts for nonprofits—but it had been a while.

In April 2016, they received the news that matches had been found, and they would be part of an eight-person transplant chain. Nancy’s transplant and J’s donation were scheduled for the same day. Both were very successful, and their daughter served as caregiver during their recovery.

Today, J. is happy to say he’s just as healthy as he was prior to donation, and he continues to ride his bicycle. In fact, he recently created a fundraiser he called “The Oregon 36” to raise money for his grand kids’ school. Over 29 days, J. rode 1,995 miles through all 36 counties of Oregon. “I averaged about 69 miles per day, not quite my goal, which was 70 – my age, now” laughs J.

J. encourages those considering living kidney donation to stay active and healthy both before and after donation. “Don’t be fearful of health issues or lack of energy after donating. The screening process by the donor team is extensive and makes sure you are healthy enough to donate.” His own recovery took about four weeks to be back to most of his routine and six weeks to be back on his bike.

“The feeling of knowing that your kidney is helping someone and their loved ones have a better life is a huge blessing,” says J., “I would do it again in a heartbeat.”