Jarod has come a long way since spending his 13th birthday in the hospital waiting for a donor heart -- he's reached Eagle Scout and the Governor's office.

Jarod Doerner was a pretty typical 12 year old. He was an active Boy Scout who liked video games, Legos, and Pokemon. He loved his family, even though his little sister annoyed him sometimes. And then, on Mother’s Day 2014, an unknown illness suddenly hit.

Jarod was initially diagnosed with pneumonia, but with a heart rate of over 250 beats per minute, doctors kept looking for something more. At OHSU’s Doernbecher Children’s Hospital, he was diagnosed with dilated cardiomyopathy – which meant his heart was getting bigger (nearly double what it should be), while his heart’s walls were becoming thinner.

The Doerner Family had a difficult separation ahead. For 5 months, Jarod was a patient at Lucile Packard Children’s Hospital in Stanford, CA, accompanied by his mom. LPCH began the process of putting him on the transplant waiting list and installed an LVAD (left ventricular assist device) to keep his heart beating while he awaited transplant.

Jarod spent his thirteenth birthday in the hospital, waiting on a heart. On July 1, 2014, he received the gift of life.

“I am only here today,” Jarod says, “because someone made the generous choice to help others as their last act.” 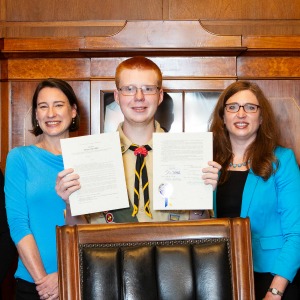 Jarod has determined to make his life and his donor’s gift really mean something. To this end, he volunteers for causes he deeply believes in. He has become an Eagle Scout, volunteers with the Cub Scouts, and at a summer camp for sick children. He is also a dedicated advocate for organ donation. In 2018, Jarod partnered with Donate Life Northwest and his State Representative, Julie Fahey (pictured right), to write a new law in Oregon. In April 2018, Governor Kate Brown signed this law which makes the second week in April, “Organ, Eye, and Tissue Donor Appreciation Week.”

Jarod has a message that he wants each reader to walk away with:

“Your registration will have far-reaching and profound effects. The life you save or help might be the next Einstein, Lincoln, or Elvis. Everyone should have the chance to be the best person they can be. Donate.”