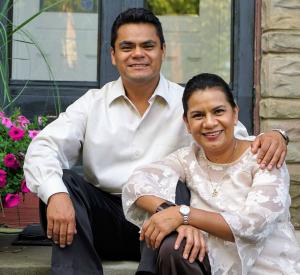 Alejandra’s life changed when her younger brother, Jose, suffered an unexpected heart attack at the age of 35.

Alejandra’s life changed when her younger brother, Jose, suffered an unexpected heart attack at the age of 35. Jose survived, but his heart was damaged to such an extent that sometimes he could not walk or have a conversation without becoming exhausted. A heart transplant was needed.

Jose was added to the waiting list 15 months after his heart attack. Alejandra says, “For Jose, he suffered with his physical health and as a family we suffered a lot also because it is painful to see someone that you love in such a complicated situation. But it was not all bad, during that time we received innumerable blessings and support from lots of people.” Eight months after being added to the waiting list, Jose received the greatest gift – the gift of life.

Jose was so inspired by the love he had been given that he felt the need to return something to the world from which he had received so much.  A few days after the transplant, while still in his hospital bed, he mentioned to Alejandra his wish to help others so that they could have a second opportunity to live. There, in that moment, Cadena de Vida (Chain of Life) was born. “The first link in the chain,” explains Alejandra, “was Jose’s heart donor.”

The siblings planned Cadena de Vida as a festival where the Spanish-speaking community could receive, in a joyful way, information about the subject of blood donation and also the donation of organs, eyes, and tissues. Cadena de Vida is a family event with live music, games, raffles, face painting, clowns, Zumba, snacks, and testimonies about donation. “We have had a lot of success in the last five festivals,” shares Alejandra, “the Red Cross has collected 197 units of blood and with that many people have been saved, also many people have registered as organ donors.” Many organizations have joined the festival including: the Promotores de Salud (Health Promotors), Northwest Family Services, Northwest Seniors & Disability Services, Medical Team International, Virginia Garcia Memorial Health Center, among others. Last year approximately 700 people attended the festival and they hope that even more will attend this year.

“Before Jose’s illness,” Alejandra explains, “I was only focused on my own life and my own family, but because of the generous gift that my brother received, I have been inspired to serve my community.” In addition to working throughout the year to plan the Cadena de Vida festival, Alejandra is a committed volunteer at Donate Life Northwest and is a Promotora de Salud (Health Promotor) in her McMinnville community. “I thank God and all of the people that help to make this festival possible,” says Alejandra, ”I feel very thankful and fortunate because, through service, I have had the opportunity to meet amazing human beings and learn that true happiness is in service.”

In 2017, Alejandra was awarded the United Network for Organ Sharing's National Donor Memorial Award for Excellence, in recognition of her untiring efforts as a donation advocate. This was the first time in the award's history that it was bestowed upon the family member of an organ recipient.