An average kidney transplant lasts between 10-15 years. The kidney Ken received from his mother has lasted over 45 years -- still going strong and looking forward to the future.

Ken grew up in a large, close-knit family. He was a regular 18-year-old high school student, working a part-time job and enjoying his senior year when his mom noticed some unexplained bruising on his arms and legs. She sent him to his primary care doctor for a check-up and what they found was anything but routine. The teenager’s high blood pressure gave his doctor plenty of cause for alarm and caused him to order further testing and then a hospital work-up. Then, Ken had to begin 5 months of dialysis. Fortunately, Ken’s mother, Doris, was tested and found to be a match. On October 6, 1975, Doris gave her son life a second time.

Ken’s transplant saved his life, but it also brought about other blessings, including strengthening his relationship with his mother: 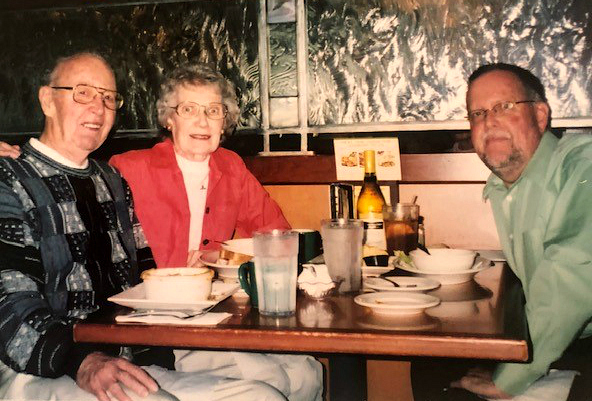 “We were always a close family, but the waiting made my mother and I even closer. I felt blessed that she would do this for me. I asked her once, the night before the transplant, ‘Are you sure you want to do this?’ Of course she said yes. I have two children of my own now and understand more deeply the unquestionable desire to do this for your child.”

On average, a transplanted kidney lasts 10-15 years. As of October 2020, Ken has had his mother’s kidney for 45 years. Though Doris (pictured right) passed away in 2012 at age 88, her kidney is still alive and healthy in her son. He looks forward to celebrating her and her kidney’s 100th birthday in 2024.

In the decades since his transplant, Ken has been able to live an active life. He married and has two children. And he worked a career in the banking industry before medically retiring in 2020 due to the threat of COVID-19 on his immune-suppressed system.

These days, Ken is still going strong – homeschooling his teenage son. Ken feels many side effects of taking transplant medications over such a long time. He has diabetes and has battled several instances of skin cancer. And he keeps a “go bag” packed for occasional hospital trips. But, he emphasizes, “I’m still blessed.”

Ken’s message to those considering registering as an organ, eye, and tissue donation is clear and compelling: “We are all here on this earth for a very short time, but what you can do by donation may extend your life in and for someone else, and that is a great gift and legacy to leave.”