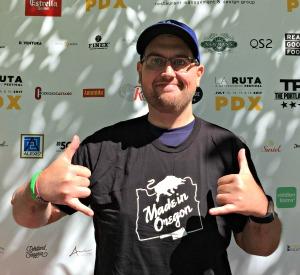 Faced with so many health problems, many people would have given up. But Mike has faced it with courage and determination. Now, with a donated heart, a donated kidney, and enthusiasm, he's moving forward.

Most people who know Mike Hargett will tell you that he’s one-of-a-kind. In fact, that’s indisputably true. He is the first hemophiliac double transplant recipient in the world.

Born with hemophilia, Mike contracted Hepatitis C during a blood transfusion during brain surgery at only two days old. From the very beginning, his chronic and life-threatening medical issues were daunting – from painful joint bleeds to surgeries and hospitalizations, compounded by obesity and crushing medical expenses. It would have been easy to get discouraged as he watched friends and family in the hemophilia community die. Then, in 2004, Mike was diagnosed with dilated cardiomyopathy.

When many would have given up, Mike fought back. In order to be listed for a heart transplant, Mike lost 250 pounds. He ultimately received a “perfect new heart” on May 9, 2016 at Cedars-Sinai in Los Angeles. But even then, his fight was just beginning, and soon the wait began for a kidney transplant.

Mike faced kidney failure and dialysis with as much courage and enthusiasm as he has faced it all. In spite of grueling dialysis sessions and countless doctor and lab appointments, Mike found time to become a vocal advocate for the Donate Life community. He also began the search for a living kidney donor, whom he found in September 2017 – a young wife and mother among his circle of friends.

Thanks to Alicia, whose “spare” kidney Mike received on October 31, 2017, Mike is enjoying renewed health and energy. Without dialysis to drain his time, Mike is more able to focus on spending time with his family and friends. He’s moving forward toward his dream of opening a heart-healthy food truck. And, as always, he continues to devote himself towards volunteering in the healthcare community around him, including as one of the most dedicated and inspiring volunteers at Donate Life Northwest!