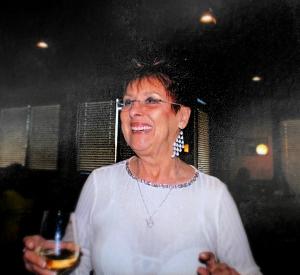 After an airborne bacteria infected her right eye, "simple" tasks became impossible for Nancy. Thanks to a cornea donor, she now has her vision and her life back.

In 2015, Nancy’s sight was unexpectedly compromised. At first, she noticed a blurring of her vision, but wasn’t too concerned until her eye became pink and closed up. Her doctor discovered that a bacterial infection from an unknown source had built a wall around her cornea. Nancy’s anxiety grew when she arrived in Pittsburgh to see a specialist and was greeted at the emergency entrance by a medical team wearing full biohazard gear. For the next 24 hours, she was quarantined and told that if her eye, now sealed closed, didn’t open within the next eight days, she might lose it. Over the course of eight days, Nancy remained hospitalized, undergoing tests while enduring throbbing pain in her head and extreme light sensitivity. She put a lot of faith into the medical team whose voices she came to trust but whose faces she could barely see. On the eighth day, Nancy’s eye opened.

Nancy credits God with opening her eye, but there was still a long road ahead – more tests, more pills, more drops, but no cure in sight. When her eye doctor began using an autologous serum to battle the infection, Nancy began to see real improvements, but doctors recognized that the eye was too badly damaged to recover fully. Cornea transplant would be the best solution.

Four years after her initial infection, Nancy felt ready to undergo surgery. The procedure was longer than usual at three and a half hours, but it changed Nancy’s life forever. Nancy says, “I call it my ‘angel eye.’ I look at my eye in the mirror and I say, ‘You know what? We’re family now. I have a family in Portland somewhere. You are my gift.’”