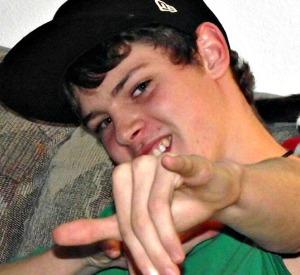 Nathan became an organ donor at age 17, donating his liver and both kidneys. He will always be remembered for the lives he saved.

On July 14, 2011, 17-year-old Nathan Cadwallader was very proud and excited because he had just cashed his first paycheck from his construction job. But on his way home, he made an unfortunate choice. That afternoon, the North Medford High student attempted to run across seven lanes of Highway 62 in Medford, Oregon. Tragically, he misjudged traffic and was struck. Six days later, Nathan was declared brain dead. But Nathan’s family urges that he should not be remembered for his regrettable choice or for his tragic death. He should be remembered for the lives he saved. As his stepmother Dolores says, “He was the one who gave to save.”

Nathan was able to donate his liver and both kidneys, as well as donating his trachea for medical research. It was incredibly special for his family to learn that his liver saved the life of a 58-year-old married Army veteran who was suffering from liver disease. Nathan’s father, Keith, is also a veteran.

Dolores and Keith were faced with such a stressful decision – whether or not to allow their youngest son to be a donor – during the most difficult moment of their lives. But Dolores knew Nathan’s wishes. Sometime before his death, Nathan had seen Dolores’s driver’s license. He noticed her designation as a donor and expressed that one day, he would be interested in being a donor, too. In those terrible moments at the hospital, when the Cadwalladers were asked, Dolores knew the answer to the question was yes. Nathan wanted to save and heal lives through organ, eye, and tissue donation.

“Nathan was able to give life because he lost his,” says Dolores. “Parts of him are still around here, helping people.”