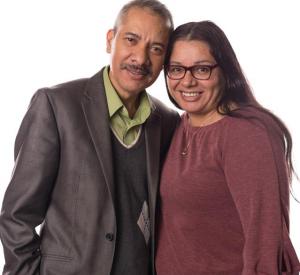 Nelson's illness came suddenly and quickly led to a life of medications, restrictions, and dialysis. But now, because of the generosity of a donor, Nelson is living to encourage those still on the waiting list.

Nelson Zepeda never had any symptoms, and to this day, he doesn’t know what caused his kidneys to fail. In fact, Nelson considered himself very healthy until he was suddenly diagnosed with renal failure at the age of 35.

Nelson’s illness had an immediate and intense effect on the rest of his life.

“You live with the thought that you will not get better. You cannot eat what you like. You want to drink water, but you cannot drink a lot. You suffer from high blood pressure, and you have to take many medicines.”

Fortunately, as Nelson faced his new life of medications, dietary restrictions, and dialysis, his family provided a tremendous support system. He and his wife, Magdalena, had started their family when they were quite young and now had five children and five grandchildren.

“They always told me to be strong and have faith. And the truth is that it actually helped me to see life in a more positive way.”

After many years of dialysis, Nelson received a call from Oregon Health & Science University (OHSU) that they had a compatible donor kidney for him. On March 25, 2018, Nelson received the gift of life.

Nelson’s life has always been very active, but since his transplant, it’s busier than ever with family, work, and volunteering. He says he feels stronger – like his “batteries are recharged.” And though he will take anti-rejection medications for the rest of his life, he is at peace with that and happy to be off dialysis.

Today, Nelson is a vocal supporter of organ donation, and has a message of encouragement for those on the waiting list: “There is hope! Be strong and positive. The gift of life will come to you.”