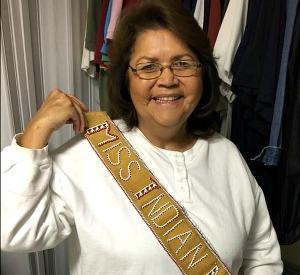 Norrine is grateful for breath, life, and the ability to serve -- both the Donate Life community and the Native American community.

Norrine Smokey-Smith’s life before her transplant was very busy and very full. She was a “Supermom” and a wife, as well as a career woman. And as a proud member of the Washoe Tribe of Nevada & California, she volunteered on committees involving Native American children and served on her tribe’s Tribal Council. When she began to notice that routine daily activities left her short of breath, she visited the doctor and received an unexpected diagnosis: Nonspecific Interstitial Pneumonitis (NSIP).

By the time she was diagnosed, Norrine’s lung capacity had already diminished by 1/3. Her pulmonologist told her that she would need a lung transplant, but as she waited, she tried not to let illness slow her down. She did light house chores and cooking, even though she was exhausted much of the time. She also continued to fly to Nevada to attend monthly tribal meetings. For three years, Norrine lived on round-the-clock supplemental oxygen. But by early 2016, she was also experiencing hallucinations and sleeplessness.

On March 15, 2016, Norrine received “the call” from University of Washington Medical Center. She and her husband, Terry, made the long drive north from Portland to Seattle, where she received the gift of life from a generous donor.

Today, Norrine is grateful for breath, life, and the ability to continue serving and giving back – both to the Donate Life community and the Native community. She says, “I am forever indebted to my donor and their family for giving me the gift of life. I am incredibly grateful for each day the Creator blesses me with. Coming so close to death makes one realize how very precious life is.”

Norrine is thankful to her donor and their family, and is also thankful to her family and friends who supported her recovery. Attending Portland’s lung transplant and pulmonary fibrosis support group gave her and Terry hope even in the most difficult part of her illness. From this group, they gained valuable assistance and friendships. She and Terry continue to attend and provide their hard-learned insights to others who are on the transplant list or considering transplant. It is important for her that she honors her donor by continuing to give life and hope in this way.