Phil, a retiree in Umatilla, is one of our most enthusiastic longtime volunteers. In December 2022, he will celebrate 10 years with the donated heart that saved his life – and almost as long volunteering for DLNW.

Phil’s transplant journey began in 2012, when he was having trouble breathing. He called 9-1-1, and two heart attacks later, he awoke at Sacred Heart Hospital in Spokane, with a left ventricular assist device (or LVAD) keeping his heart beating. Doctors explained that a heart transplant was going to be Phil’s best option, and the wait began.

For some patients on the waiting list, it can take months or even years to receive a heart. (The average is about 6 months.) But Phil’s hero arrived sooner. After only about 6 weeks, Phil got the call that a compatible heart was available and on the way to Spokane for him. Leaving a cart full of groceries in the middle of the grocery store and customers applauding, Phil headed to the hospital. Unknown to Phil at the time, his donor was a 50-something dad just like him. Gabriel Barrera, Phil’s generous donor, was a 51-year-old farm worker in California, who had fallen and struck his head. Gabriel’s brain trauma was fatal, but in his death, his organ donations saved Phil’s life and at least three others. 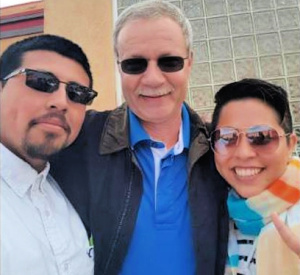 Although Phil has faced several health challenges since his transplant, he remains as active as possible – spending time with his wife, his daughter, and his grandchildren. He is also a passionate organ donation advocate, always available to encourage DLNW staff and volunteers. When not slowed by the Coronavirus pandemic, Phil enjoys gathering groups of volunteers to march or ride in parades to raise awareness about organ, eye, and tissue donation and transplantation. He is also widely known for engaging strangers in conversations to help them recognize the importance of donation. When asked about his own donor, Phil responds, “I think about him every day. I feel blessed and gifted because of this man!”

(Gabriel's family, pictured at right with his heart recipient, Phil)