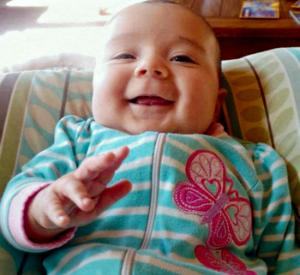 Since Rylee got sick at three months old, her family has called her their "courageous miracle." And following her sudden death, Rylee has continued to be a courageous miracle to others through organ donation.

Rylee was born on July 15, 2018 in Eastern Oregon. She was a beautiful, happy little girl who was full of smiles and laughter. Her parents, Autumn and Kyle, found her to be an easy baby, and both of her older brothers wanted to spend all of their time playing with her and helping to take care of her.

At the end of October 2018, Rylee was showing symptoms of a cold. She hadn’t been eating well, and so she was taken to the hospital to get checked out and be given some fluids. The next day, doctors decided that Rylee was no longer dehydrated, but she was exhibiting some weakness. They decided to run some tests, but before they could begin, Rylee went into cardiac arrest. Over 40 minutes, they resuscitated her, but she was unconscious.

Rylee and her mother, Autumn, were airlifted to a larger hospital where they received amazing care and love. One of the nurses told Autumn that “Rylee” means “courageous,” and so the family began praying for their “Courageous Miracle.” Unfortunately, Rylee did not recover and was declared brain dead. Knowing the pain Autumn and Kyle were feeling over losing their daughter, they knew they wanted to help other families and prevent them from going through the same thing. They asked about organ donation so their Rylee could be a “Courageous Miracle” for someone else.

Autumn shares, “When we chose to donate Rylee’s organs, we knew that it would be something precious for the recipients. However, what we found was that the process was very healing for us. Being able to help others while in the deepest grief helped dull the edge of that grief, just a little bit. It made that grief a little bit lighter and easier to carry.”

Rylee’s loss is still so recent, but her family is proudly honoring her memory:

“Going through organ donation really opened our eyes to the benefits of organ donation. We hadn’t expected to gain anything from it, but the knowledge that Rylee helped others helped us to gain some peace. Due to that, we have continued to educate people about organ donation in our community. We also participated in the Donate Life Threads of Life Quilt for 2019 to honor Rylee and the gifts she made. Our community also assisted us in honoring her memory by helping us collect over 500 pounds of items to be donated to the children’s hospital where Rylee had been cared for so that other families could feel the love and compassion we felt while there. In the future, we plan to do more fundraisers for our local hospital that can help them purchase items that make treating infants a little bit easier.”

To stay up to date on ways the Jacksons are honoring Rylee’s memory, you may visit their website.