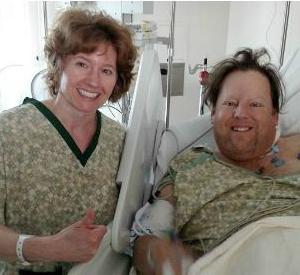 “It’s humbling to set aside your own life for a while so that another person can reclaim theirs.”

A wife, a mother, a Zumba instructor, and a blood and platelet donor, Stephanie Holladay’s journey to becoming a living kidney donor began when she learned that a woman from her hometown needed a kidney transplant. Stephanie thought she might be interested in donating one of hers and began the testing process only to learn that she wasn’t a match. The story could end there, but Stephanie’s heart had been touched by the suffering of those with kidney disease. She Googled “Oregon kidney donor” and that is where she found Scott.

Scott Warren’s life was a bit of a tightrope walk. He was married with two grown step-sons, one of whom lives at home with a traumatic brain injury. Scott also worked full time. He did not have time to be sick, but sick was what he was. Scott found himself in kidney failure caused by a disease called IgA Nephropathy, and for four years, Scott continued the delicate balance of family and work while he also endured in-center dialysis treatments three days a week, four hours each time. Scott faced chronic fatigue and the constant worry of heart attack or stroke.

“It’s humbling to set aside your own life for a while so that another person can reclaim theirs.” – Stephanie Holladay

On April 4, 2016, Scott received a call from Legacy Transplant, telling him that a woman named Stephanie – a woman he did not know and had never met – was a match for a living kidney donation. A little more than a month later, on May 9, their surgeries occurred, and life will never be the same for either of them.

Stephanie awoke from surgery with little pain, asking the nurses how Scott was doing. The next day, she shocked the doctors and nurses by being strong and well enough to go home. But before she left the hospital, she visited Scott in the ICU. She found a smiling Scott – with good color and more energy than he’d had in a long time and with a new kidney that was doing its job well in its new home.

Scott says, “The greatest rewards I’ve experienced have been the knowledge that my donor is recovering nicely, and experiencing renewed energy. I’ll be able to return to work better than I’ve been in years, and I have the opportunity to spend many more wonderful years with my wife and family.”

Meanwhile, Stephanie was a little worried about one thing. “A strange thought crossed my mind…that once I donated a kidney, I would no longer be useful to a person with kidney disease, or the kidney community. I was wrong! I have shared my personal experience on Facebook, was interviewed by local TV, have had many personal conversations with both friends and strangers, and have shared my experience and insights in online support groups.” And both Stephanie and Scott are continuing each day to support each other and advocate to the community that giving the gift of life doesn’t just save lives – it enriches the life of the donor in ways they could never imagine.

“Living kidney donation is a journey worth taking!” – Stephanie Holladay