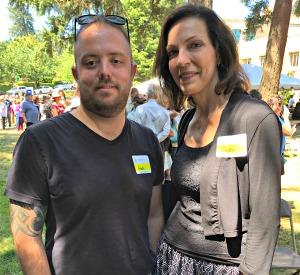 A stem cell transplant cured Arash of Diamond-Blackfan Anemia when he was 16. Years later, his stepmother's living kidney donation saved his life. Today, this healthy registered nurse is giving back by volunteering!

At only 7 months of age, Arash Fathizadeh was diagnosed with a blood disorder known as Diamond-Blackfan Anemia. At that time, this incredibly rare illness had only 900 known cases in the world. It caused Arash’s bone marrow to be unable to produce as many red blood cells as his body needed.

Little Arash loved soccer. As a boy, he played on a team that was coached by his dad, Amir, who says, “When Arash was 6, he was the best little soccer player you ever saw.” But heavy prednisone dosages made Arash puffy and stunted his growth. His bone density became like that of a 60-year-old man, and by the age of 11, he could hardly run.

At age 12, Arash began to endure four years of blood transfusion treatments. Those came to an end when, on Arash’s 16th birthday, Arash had a bone marrow transplant using stem cells donated by his older brother, Bijan. The procedure was successful and cured Arash’s blood disorder. However, in his early 20s, he was diagnosed with End Stage Renal Disease.

25-year-old Arash went on the kidney transplant waiting list as he began doing 10 hours per day of dialysis. As he waited on a kidney, his family members began the process of being tested to be a living donor. They expected that one of them would be able to donate a kidney, just as his older brother had earlier donated stem cells. Unfortunately, one by one, Arash’s family members were tested and disqualified, due to their own health conditions. Finally, his stepmother, Sandra got the good news that she was eligible and compatible. On July 30, 2013, she happily gave her stepson the gift of life.

Arash, Amir, Sandra, and their family are so grateful for the new chance Arash has been given to live a healthy life. They are advocates for donation and transplantation in their community. In the summer of 2018, Amir began volunteering with Donate Life Northwest, and as a new RN, Arash began volunteering for Northwest Kidney Kids at their summer Kidney Camp.