Bobby's sudden, devastating death left a hole in his family, yet bonded them together with a new family and brought them all healing through his heart donation.

Bobby Olive was a 27-year-old family man. A loving father of three daughters, he and his fiancée, Anita, were awaiting the birth of their son, who would be named after his father.

Bobby was “at the wrong place at the wrong time” when he was tragically shot. In the early morning hours of December 4, 1985, doctors at Legacy Emanuel told Martha Van Arsdale, that her son, Bobby, would not survive. They also told her that if she agreed to donate his organs, other lives would be saved. At that time, organ donation and transplant wasn’t common. Martha, a devout Seventh Day Adventist, took time to pray about it and then told doctors “yes.” She was sure that her son would have wanted it that way. In fact, Bobby would become the very first heart donor in the state of Oregon. 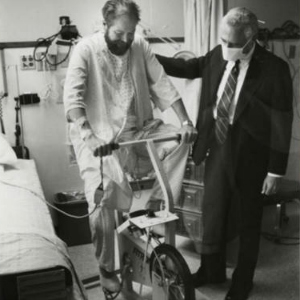 While Martha was praying that night, she didn’t know that a family in Battle Ground, Washington, was also praying. Virginia Merrill’s husband, Wesley, had been hospitalized at Oregon Health & Science University since October 27 of that year. 44-year-old Wesley, a construction worker who was suffering from an enlarged heart, or cardiomyopathy, was slowly dying.

On December 4, 1985, doctors at OHSU transplanted Bobby’s heart into Wesley’s chest. Within hours, Wesley was sitting up in bed, breathing on his own.

The Olives and the Merrills felt a bond from the first time they met, and over the years have maintained their close friendship. In 1990, Wesley died, after having almost five extra years with his wife and two children. But Wesley’s wife, Virginia, continued to serve as a Donate Life Northwest volunteer for years, working side by side with Bobby’s sister, Balinda Olive-Beltran, and the rest of their family to tell their story and raise awareness about organ, eye, and tissue donation. Decades later, Bobby continues to save lives by inspiring others to say “yes” to organ, eye, and tissue donation.