Lung disease slowed Cyndi down, but it didn't stop her. Now, with the precious gift of donated lungs, Cyndi is powering into a healthy future.

Just a few years ago, Cyndi Moody of Bainbridge Island, Washington, was the owner and operator of a very busy restaurant, an avid gardener, the mom of two and grandmother of six. She enjoyed concerts and taking long motorcycle trips with her husband, Brian. 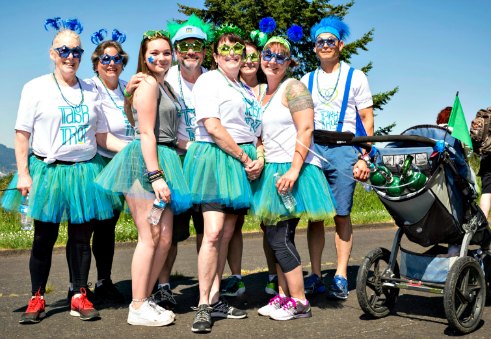 In 2016, after a bout with pneumonia, Cyndi received a shocking diagnosis – Idiopathic Interstitial Lung Disease (ILD). ILD causes progressive and irreversible scarring of lung tissue and is usually caused by exposure to hazardous chemicals or smoking – but neither of these was the case with Cyndi. Not knowing why or how she got it, Cyndi faced her diagnosis anyway, and as the disease progressed she fought to live as “normal” a life as possible. Soon, however, she became sicker, was increasingly dependent on oxygen, and eventually had to sell her beloved restaurant. It was during this time that Cyndi became involved in the Donate Life Northwest community – even traveling down to Portland to walk in the 2017 Tabor Trot – pushing her oxygen tanks in a stroller on the 2+ mile path.

Cyndi was on the transplant waiting list for three years. She describes the experience as “hard,” saying, “It felt as if life were put on hold. It was hard to make any plans, as you never know when you’re going to get ‘the call.’”

In Fall 2019, Cyndi’s health was beginning to decline rapidly. Then, on November 13, 2019, she received her second chance at life – a bilateral lung transplant at the University of Washington Medical Center. It was a lifesaving experience but was also very emotional. Cyndi explains: “I won’t say we had lost hope, but we were getting worried that a match might not come in time.”

Just months after her transplant, Cyndi is still recovering and regaining her strength. But she already sees and feels a vast difference.

“I feel AWESOME! It’s the little everyday things – from being able to jump in the car and just go without oxygen tanks to not getting my oxygen hose tangled up on everything to the simple act of walking without losing my breath… I even recently got to go on a motorcycle ride with my husband!”

Cyndi feels so deeply grateful to the selfless donor who saved her life. That donor gave Cyndi the chance to watch her grandchildren grow up and gave her more years to spend with her husband. To honor this precious gift, Cyndi has made a promise to her donor’s mother in an as-yet unanswered letter that she will “pay it forward.” In fact, Cyndi urges us all to pay it forward with her: “Please strongly consider being a donor – your choice could saves someone like me.”