With a four-generation legacy of cornea and tissue donors, David's family knows the pain of loss, but they also know the healing balm of giving the gifts of life, sight, and health during their time of loss.

David Oliphant was a man of strong faith, kindness, and generosity. His sister, Beth, describes him as a man with a wonderful and engaging personality, always ready to offer others second chances.

An avid bike racer, David and his brother Duncan joined their team at Portland International Raceway for a race one overcast June evening in 2010. A professional photographer snapped a photo of that evening. David is surrounded by his competitors, friends, and brother, and in the picture he is centered squarely in the middle, wearing his white helmet, and looking happy. But at that moment, he was taking one of his last breaths. Just after David crossed the finish line, while still on his bike, he collapsed on the track experiencing sudden cardiac arrest. He died almost instantly. 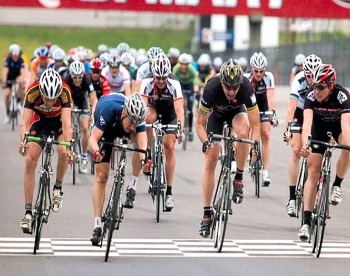 David had registered as an organ donor. As his family grappled with their shocking loss and acute sorrow, they learned that David could continue to do what he had always done – offering others second chances, this time through the gifts of life, sight, and health. His decision to register gave a life-changing second chance to more than 50 people.

David is part of what is, so far, a remarkable four-generation legacy. His grandmother, Elizabeth, had been a tissue donor in 1990. Inspired by David’s gift, David’s father, Doug, passionately advanced the cause of donation by joining the board at Donate Life Northwest. At Doug’s death from cancer in 2014, he also became a cornea donor. Then, David’s sister, Doug’s daughter, Beth, took up the cause. She joined the board at Donate Life Northwest, where she continues to serve. Tragically, in 2015, Beth’s daughter Missy also passed away, but was also about to become a cornea and tissue donor.

This incredible family knows the pain of loss. But they also know the healing balm of giving during their time of loss. Beth proudly yet humbly works in the community. She says, “I have found that by registering others to become donors and contributing to Donate Life Northwest’s efforts to encourage living donations, some of the ache is beautifully erased in me.”