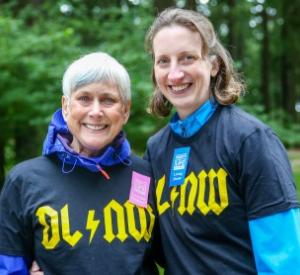 Emily had never met Liz, but when she heard that Liz needed a kidney, she volunteered to be tested and ultimately donated to the woman who is now her friend.

Emily Lighthipe is a wife, a mother of two, and a physical therapist at OHSU Doernbecher Children’s Hospital. She was a stranger to Liz Campbell but had been a longtime customer of Liz’s SE Portland store, Kids at Heart Toys. When Emily read in a local publication that Liz needed a kidney, she volunteered to be tested. Emily was a match, and on February 13, 2018, she donated one of her kidneys to her new friend.

Emily had considered becoming a living donor since 2000, when her husband’s uncle’s life was saved by his cousin -- a living kidney donor. After hearing about Liz’s life with End Stage Renal Disease, with its frequent dialysis treatments, and Liz’s two years on the national waiting list, Emily knew that donation was something she wanted to do.

Today, Emily still stands by her decision: “Being a living kidney donor is a very feasible thing. You don’t have to be a superhero to qualify.” Emily wants to show the world that living kidney donation doesn’t take away from her life. In June 2018, just four months after her surgery, Emily was even able to participate in a triathlon, and she has signed up for two in 2019!