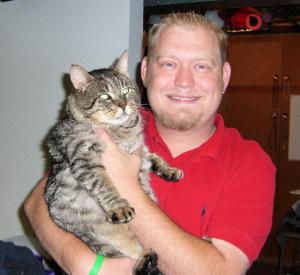 Geoff was only 7 months old when he was diagnosed with Cystic Fibrosis at Doernbecher Children’s Hospital. Once his parents, Bob and Donna, recovered from their shock, they made a vow that CF would not control their lives and that their son would live a full life. Young Geoff thrived. He learned to ride a bike when he was 3 and began swimming at age 4. When he was in 4th grade, he joined the kids’ wrestling program at Portland Parks & Recreation. Then he wrestled – and lettered – all four years of high school, even serving as team captain.

Geoff’s Cystic Fibrosis had progressed slowly, but during his senior years of high school, his health began to decline. As he worked and completed college, he battled Crohn’s Disease and underwent a bowel resection. By October 2005, he was on disability and living back at his parents’ home when he learned his lung capacity had fallen to only 20%. During a series of hospitalizations that fall, Geoff made the decision to pursue a lung transplant.

Geoff was on the lung transplant waiting list for 75 days. He and his family took great care to remain within an hour from the airport at all times, knowing that when the call came, they would need to get to the University of Washington as quickly as possible. They packed their bags and pre-arranged their charter flight. And on the morning of June 5, 2006, the call came. Geoff’s dad, Bob, describes the experience:

Geoff got the call at 6:00am and told them he would be at the University of Washington by 9:00am. A neighbor took us to the Hillsboro Airport….Geoff walked in the front door of UW at 9:00am. Once we got to UW, reality set in and we started the journey of a lifetime. When Geoff went into surgery, we did not say goodbye, we said, ‘We will see you soon.’ Twelve hours later, we saw Geoff in ICU.

Summer 2006 brought a great improvement to Geoff’s health and life. He resumed golfing, working on his hotrod, and enjoying his life. Sadly, by 2012 the combination of CF and transplant medications had begun taking a toll. His health began to deteriorate, and on May 5, 2014, Geoff suffered a massive heart attack. Three days later, his family made the decision to remove him from life support. Remarkably, prior to his heart attack, Geoff’s transplanted lungs were still functioning well – at 90%. And after his death, Geoff gave the gift of sight by donating both of his corneas.

Geoff’s family shares their story with the hope that people will walk away with a message: “Life is precious, and if you can donate an organ, please consider doing that as it may help another person enjoy life.”