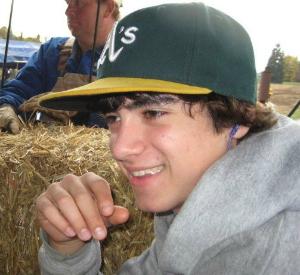 While Justin left behind the memories of an active young man that brought smiles to his classmates and family, it was his legacy of being an organ donor that left the biggest impact.

Justin Boyce was a happy, healthy 17-year-old who enjoyed the outdoors, as well as the love of his close family and friends. He was an avid ice hockey player, BMX rider, skateboarder, guitar player, and beat-boxer. He was also the class-clown at his school and could be found wearing crazy Christmas and Halloween sweaters, just to get a smile out of his peers.

What Justin didn’t joke about was his decision to donate when he acquired his driver’s permit. His mother couldn’t have been more proud to know that her son would think of others should something happen to him. Tragically, his family lost him a short time later at the young age of 17. And while that has forever altered their lives, it has also altered the lives of several others in a different way.

“We didn't have to think about making the decision, as it was our son's wish,” says Justin’s mother, Melissa Eiden. “We met with the amazing staff from the Pacific NW Transplant Bank to help facilitate the donation process while we were at the hospital with Justin. They were amazingly empathetic in helping us navigate through our grief during the process and have continued to be there to support us along the way.”

In the end, Justin was able to donate his heart, lungs, kidneys, pancreas and liver, saving the lives of more than 6 people. Justin was also able to donate his corneas and tissue, impacting countless lives. While Justin left behind the memories of an active young man that brought smiles to his classmates and family, it was his legacy of being an organ donor that left the biggest impact.

“It has changed our lives in knowing that our beautiful son is still living on in others.  We’re so proud of him and his decision to help others.  He couldn't have known what a difference he has made in his recipient's lives. This has helped us become even stronger advocates of organ, eye and tissue donation.”