Loren's death was sudden and unexpected, but he lives on through his kidney and liver donations. His wife and daughters also continue to share his lifesaving legacy.

Loren Leighton was a beloved husband and father of three from the Oregon coast. After graduating from Oregon State as a chemical engineer, he worked for Weyerhaeuser/International Paper for more than 35 years.

Loren believed in putting God first and family second before his career and other activities. He also believed in serving; he was active in his church and enjoyed mentoring young men.

Loren was an avid fisherman – especially of salmon and steelhead. And in the last years of his life, inspired by his daughter Lindsey, he began marathon running. He ran 13 half marathons, ran his first marathon in 2018, and then qualified for the 2019 Boston marathon – which he dreamed of running with Lindsey.

On November 7, 2018, while picking apples with his wife, Irene, Loren suffered a tragic fall from a ladder. Sustaining severe head trauma, Loren died from his injuries three days later. However, he had made the selfless decision to become and organ, eye, and tissue donor and was able to save three lives by donating both of his kidneys and his liver. 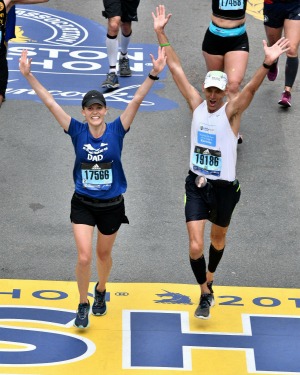 Lindsey qualified for the Boston Marathon in 2018, but when they both registered in the fall, she missed being able to run in 2019 by seven seconds when over 7,000 qualified runners were cut.  In February 2019, when the Boston Athletic Association heard Loren and Lindsey’s story, they extended a special invitation to her, allowing her to run in her Dad’s honor. On April 15, 2019, Lindsey completed the Boston Marathon in 3 hours, 57 minutes, and 48 seconds. On the route, she made a new friend – a father whose daughter had died and become an organ donor in 2002. Side by side, Lindsey and this donor dad finished their honor runs together. Speaking about her experience after the race, Lindsey said, “This was my slowest marathon yet, but it was never about the time. Some races in life aren’t measured in minutes and seconds but in tears and love. I feel so honored to run for my Dad, and I think he would have been proud!”