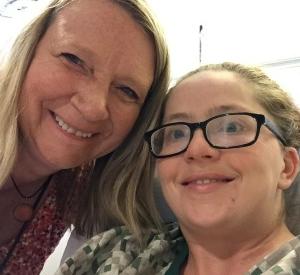 After Luanne's living kidney donation, she thought, "What can I do next?" And the answer was the Erase the Wait mentorship program -- where she met Ashley.

For more than three years, Luanne Tilson’s brother-in-law, Dale, faced the uncertainty and stress of life on the kidney transplant waiting list. But when Luanne, a nurse, learned that she and Dale were the same blood type, her kind, caregiver heart thought, “How can I not get tested?” On January 7, 2014, Luanne became Dale’s living kidney donor.

After Luanne’s donation, she began looking for other ways to get involved – specifically in kidney donation education. That’s when she learned about Donate Life Northwest’s Erase the Wait mentorship program.

“When I heard about the opportunity to become a mentor to an individual on the kidney waitlist,” Luanne explains, “it felt perfect. I signed up right away!”

Ashley Mayer is particularly glad Luanne did sign up. For more than a decade – since she was 12 – Ashley had been in kidney failure. Her sickness and the journey to kidney transplant had been hard. But in Ashley’s new mentor, Luanne, Ashley found much-needed support. The two women are quite different – different ages, different backgrounds, and even living in different parts of the state – but in spite of the differences, they built a strong relationship. “I’ve been able to watch her grow, advocate for herself, and become unafraid to share her story and ask for help,” Luanne proudly says of her mentee.

Throughout their mentoring relationship, Luanne accompanied Ashley to appointments and encouraged Ashley’s concerned family members. Even Ashley’s transplant team recognized and thanked Luanne for her helpfulness. And when Ashley received her kidney transplant from a generous deceased donor on September 4, 2019, Luanne was by her and her family’s sides.

Today, Luanne and Ashley continue to be friends and donation advocates. They take every opportunity to encourage folks to register their decisions to be organ, eye, and tissue donors. Additionally, Luanne urges, “If you received a kidney from a living donor or are a living kidney donor yourself, you too can become a mentor to someone who is waiting for a kidney transplant!” Click here to learn more.