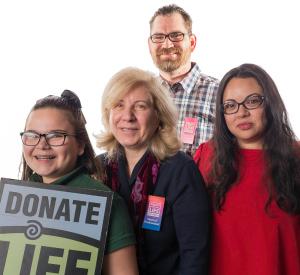 A longtime volunteer, Maria became Latino Outreach Coordinator at DLNW in July 2018. She is passionate about sharing her experience, knowledge and strength with the Latino community – and she has a lot to offer.

Maria’s connection to organ, eye, and tissue donation started when she met and began a relationship with David Dewitt. She learned that David had suffered from kidney disease as a young man. He had received a successful kidney transplant and was healthy. It wasn’t until after they married that she began to understand how difficult kidney disease could be. Two years after their daughter, Nevaeh, was born, David became sick again.

David’s illness was incredibly difficult for their family. David was too sick to work, and Maria found herself taking care of their family – including her toddler daughter. The situation worsened drastically when they learned that young Nevaeh had inherited the same genetic disease as her father. Maria considered becoming a living donor for David, but ultimately didn’t because she knew that one day, Nevaeh might need her kidney. Their family was very lucky, and after two years on the waiting list, David received a kidney from a deceased donor. The transplant was successful, and he was able to return to work, helping people with mental illnesses to find housing.

When Nevaeh was small, she was anxious and scared about her health condition. She had seen what her father had been through. But Maria and David have educated Nevaeh about her illness. They are teaching her to have hope and to live with an attitude of gratitude. Today, Nevaeh is a normal, healthy twelve-year-old. She has learned compassion, and each year, she organizes a Barbie doll drive to collect dolls for sick children at Doernbecher Children’s Hospital. She and her whole family are very active volunteers for Donate Life Northwest.