In Kindergarten, Nicole and Anna were such good friends that they pretended to be sisters. But since Nicole donated a kidney to Anna in 2007, they "share" a kidney and the gift of life - a bond they feel is closer than sisters.

Nicole and Anna became fast friends in Kindergarten, where they learned they had been born at the same hospital just five days apart and were delivered by the same doctor. And when they noticed their matching butterfly-shaped birthmarks that just confirmed it – they were sisters.

Over the years, they were there for each other through everything: school, graduations, marriages and babies. But life wasn’t always easy for them. In 2000, Anna was diagnosed with the autoimmune disease, Lupus. Then, in February 2007, Anna’s kidneys shut down.

Nicole had never spent much time thinking about organ donation but seeing her best friend suffer brought it to the front of her mind. Nicole shares, “She wasn’t living her life anymore. Dialysis treatments were every other day and her off day was spent being sick from dialysis.” 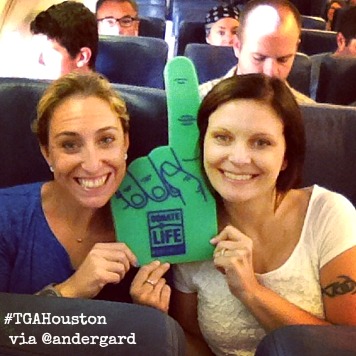 Anna would never have asked Nicole for a kidney, but Nicole knew in her heart that it was meant to be. Nicole found out who Anna’s nephrologist was and started the process of being tested to be a living kidney donor. On November 7, 2007, after nearly a year of dialysis for Anna and nine months of testing for Nicole, Anna received her new kidney in Seattle at Virginia Mason Hospital.

Nicole has no regrets about the sacrifice she made. Anna’s health immediately improved, and her Lupus even went into remission for a few years. Today, Anna’s new kidney continues to serve her well. And their bond is stronger than ever. Nicole explains, “We no longer need to pretend we are sisters, because now we share something even more special, we share the gift of life.”

Nicole devotes her enthusiasm and energy to spreading the word about living donation. Her message is clear: “In the state of Oregon, most will wait at least 3-5 years before they can stop dialysis treatment and get on living their lives. I want people to learn about living donation because it can make all the difference for someone on the transplant waiting list.”