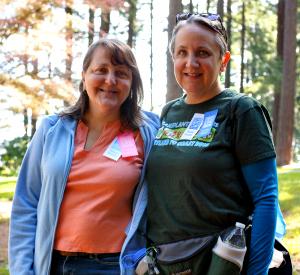 When Patrice Hudson Ball says that she believes in organ, eye, and tissue donation, she means it.

With her uncle, Rick Pfenning being a heart recipient and her aunt, Glenda Usinger being a tissue donor, organ and tissue donation have always been important to her family. But then, Patrice’s younger sister, Bobbi, learned she would need pancreas and kidney transplants.

On July 29, 2008, Patrice became the living kidney donor for Bobbi’s third transplant. Today, years later, the transplant continues to be a success, and these two sisters continue to live healthy and active lives.

Patrice is one of Donate Life Northwest’s most dedicated advocates and volunteers. One of the most notable ways she has assisted DLNW has been by teaching a capstone class at Portland State University. Since beginning this partnership with DLNW in 2011, Patrice has increased public awareness of organ donation and transplantation – not just telling her students (about 50 each year!) about the importance of donation, but also helping them to get involved in various aspects of raising awareness. In addition, Patrice joined Team Transplant Trotters in 2015 and participated in the Portland to Coast Relay.

Patrice continues to support donation in her personal life, as well. When Patrice’s beloved husband, Byron, passed away in October 2015, he donated his corneas and provided the gift of sight to two recipients. It is Patrice’s belief and hope that those recipients will get to enjoy the beauty of this world around them.