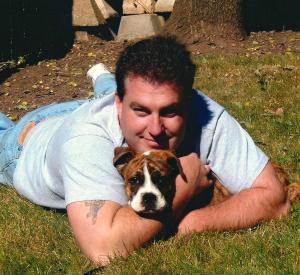 My son, Paul Pantle, was passionate about life and lived it to the fullest each day. Paul's laughter is the biggest thing I miss about him.

He had 5 children: Josiah, Katauna, Merissa, Dominic, and Cassie. They had an endearing name they called him, "Faja." All had a great relationship with their dad and really enjoyed doing a variety of activities with him. We had family reunions every 2 years and all the kids looked forward to them.  Paul made it fun because he was the biggest kid of all. Paul loved being outdoors, swimming, golf, riding ATV's, walks on the beach. He loved karaoke, a variety of board games, and Sorry Charlie (a dice game). He collected pewter dragons and knives of all sizes. Paul's puppy Brutus was the favorite gift from his wife, Dawn.

He married his soul mate, Dawn, two years prior to his death. Dawn and Paul had talked about the importance of organ, eye and tissue donation, so she knew his heart. He always believed in organ donation. Then he was hurt very badly in an ATV accident doing something he really loved to do. Later at the hospital it was determined that he had lost all brain function. Dawn knew he'd want to donate. Because of Paul's gifts, he saved four lives with his heart, both kidneys and his liver. In addition, the gift of both his corneas gave two people sight.

I have written two letters that were shared with his recipients. Over the years, I did receive back three letters from recipients. It was healing for our family to receive them. To know that their lives were enhanced by the gift Paul gave makes him a hero to those who loved him.

Paul's daughter Merissa (now grown) has been a big supporter for DLNW and used this for her senior project to honor her father.  She is also an education ambassador along with her Grama Dot. (That's me!)

I am always talking to people about Donate Life Northwest and the reason I volunteer. Why do I think people should register? There is a child that needs a heart, a mother that needs a kidney, and a teenager that will die without a new liver. The list is endless. If it were me who needed a lifesaving transplant, I would hope that someone out there would make that possible by something as simple as registering. It is a matter of doing the right thing and giving the gift of life. I believe in the program, and it is my way of honoring my son Paul and keeping his memory alive.