Patricia “PJ” Iorg was raised to help others whenever possible. At first, that translated into becoming a regular blood donor. Then, her boss told her that he needed a kidney transplant.

Gino Zahnd had lived for several years with a genetic disorder called Fabry disease. By 2017, his doctors at Oregon Health & Science University (OHSU) informed him that he would be needing a kidney transplant sooner rather than later, and he should start the process of looking for a living donor. He recalls, “When I told her that I was going to have to get on a waiting list and that I was going to have to start the search for donors, the first thing out of her mouth was, ‘Where do I get tested?’” 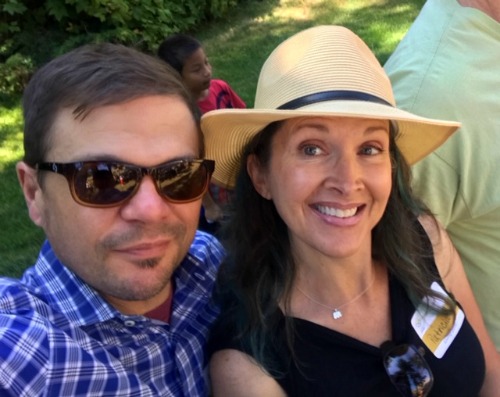 On April 25, 2017, PJ became Gino’s living kidney donor. He recovered and is back running his business and enjoying the gift of life he was given.

Even after donating a kidney, PJ isn’t done helping others. She has become an active volunteer for Donate Life Northwest. She’s a mentor in the Erase the Wait mentor program for those on the kidney waiting list, and she also co-chairs the Portland chapter of WELD – Women Encouraging Living Donation.

In addition to registering as a deceased organ, eye, and tissue donor, PJ encourages people to consider becoming a living donor:

“Every living donor I have met or talked to has said they would do it again in a heartbeat. I like to tell people that I don’t have kids, and this is my way of giving life. I didn’t have to go through 9 months of pregnancy, deal with the terrible twos or the teenage years, or pay for college. I got a full-grown 40-something adult!”