Some people are just givers, and Sherwin is one of those people. When he learned about the need for living donors, he donated a kidney. And since his donation, he continues to give hours of his time to raise awareness and save other lives.

As a professional counselor, Sherwin Moscow has dedicated most of his life to helping others. After a few of his clients spoke with him about how their kidney transplants had greatly impacted their lives, he immediately began to research the need for kidney transplants in the United States. Sherwin was shocked to learn of the number of people on the transplant waiting list. He also learned that it is possible to donate a kidney while you are still living. In that moment, he decided with absolute certainty that this was something he was going to do. Seven months later, on February 8, 2016, Sherwin became a living kidney donor. 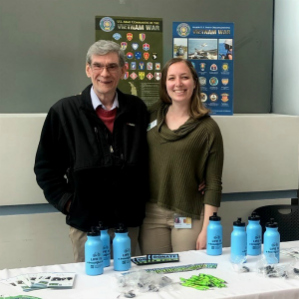 Sherwin has never met the individual that received his kidney, but he hopes that their quality of life has dramatically increased and they “use this gesture as a motivator to pay it forward in their own lives.” He sees the fact that he was able to donate a kidney as a privilege. He was truly able to do something worthwhile.

Sherwin is still giving to the people of the transplant community. He is now is a dedicated volunteer with Donate Life Northwest and specifically the Erase the Wait program. Erase the Wait helps patients on the waiting list for a kidney transplant explore living donation as an option and helps them utilize tools that might help them in their search for a living kidney donor. He hopes that people will register as organ, eye, and tissue donors and also consider the possibility of living kidney donation. He says, “There are many people that are suffering, and donating a kidney is something we can do to help alleviate some of that suffering.”