Doctors told Tanya Watson's family she would only live to the age of twelve. She surprised everyone in life, living to age 50. And in her death, she surprised them again by being a cornea donor.

Tanya’s mother, Loretta, got the phone call not long after leaving the hospital soon after her daughter passed away. It was a Donation Specialist from Lions VisionGift calling her to discuss the potential of cornea donation. The family had never considered the issue of cornea donation prior to that day, but as Loretta said, “Tanya was so unique, we didn’t give it a thought.”

A week later, on April 10, at Legacy Good Samaritan in Portland, both of Tanya’s corneas were successfully transplanted to two people who were grateful for her gift of sight.

As a child, Tanya spent the first year of her life in and out of the Children’s Orthopedic Hospital in Seattle. Her family, located in Vancouver, WA, made the long drive back and forth, many times. In those early years, they were told by specialists at the hospital that Tanya was likely only to live until the age of twelve. In the end, Tanya surprised everyone, and she lived a spirited life, filled with love, until she was 50 years old. When it came to outliving the doctor’s expectations, as Loretta puts it, “She really fooled them. She was a special child.” 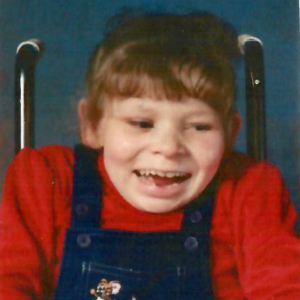 Although Tanya was small in stature, her eyes were big, blue, and beautiful. And while she was non-verbal in her communication, her gift of sight speaks loudly about her giving heart and her family’s generosity.

The loss of Tanya will always be heavy on the hearts of her family, but when thinking about her daughter’s final act of donation, her mother doesn’t hesitate to say, “It is heartfelt knowing that a small part of her is still living on. It is always a good feeling to help others.”

Loretta was right, Tanya was indeed a special child.

Special thanks to Lions VisionGift and the Watson family for sharing Tanya's story.