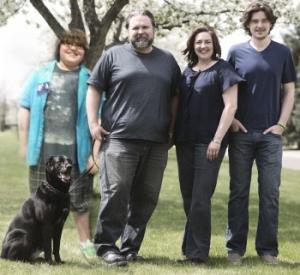 In November 2012, Josh Breznik, a goalie for the Southern Oregon Spartans hockey team, and his family suffered the terrible loss of Josh’s older brother, Ted Jr.

At the age of only 14, a young man with a ready smile, a quick sense of humor, a magnetic personality, and a love of playing “Yu-Gi-Oh,” Ted Breznik Jr (far left), died of complications of a blood disorder known as ITP.

Ted and Amy Breznik had discussed organ donation in the past, but never with their sons, Ted Jr and Josh. When the transplant team at the Alberta Children’s Hospital broached the subject, Ted and Amy had another conversation and decided to give Ted Jr the chance to save lives.

Ted Jr became an organ donor on November 21, 2012. He ultimately saved 5 lives by donating his heart, lungs, kidneys, and liver. Over the years, the Brezniks have been fortunate to receive periodic updates on some of those recipients.

Today, Ted, Amy, and Josh share their story to raise awareness about the importance of organ, eye, and tissue donation. They also want to emphasize the need for families to have those very important conversations about donation. Amy advises, “Live. Give. Be an organ donor. Ted Jr did not die because he is an organ donor, and 5 people lived because he is.”